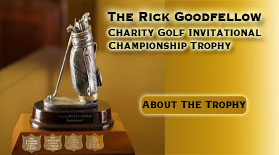 The Rick Goodfellow Trophy has been awarded annually to the winning team of the RGI since 2006.

Read the full story of this coveted trophy, and it's winners, below!

The Rick Goodfellow Charity Golf Invitational began on a modest note in 2005, the year of Rick’s retirement, with 14 attendees.

Beginning in 2006, the Rick Goodfellow Trophy was awarded for the first time to the winning team of Howard Radford, David Jamieson, David Keay and Ralph March.

However, despite their success on the golf course, Howie’s team only enjoyed the Trophy for a brief period as, under cover of darkness, at the end of the festivities, the Trophy was spirited away by a  person who, according to an unnamed source, had also attended the Invitational that day. According to the unnamed source, this person had been spotted “eyeing” the Trophy prior to and following its awarding to Howie’s team.

While the Trophy cannot tell us about the incident, the unnamed source tells us that as the Trophy was being carried off, the carrier met with a mishap owing perhaps to the influence of things that serve to confuse or disorient or simply tired from the long day of golf and the evening’s festivities. In any event, at least a couple of steps were missed in the darkness causing the carrier to tilt and lose their balance. The unnamed source indicated that the carrier while tightly clutching the Trophy fell horizontal incurring, as we understand it, some injury to themselves and damage to the Trophy. Curses and obscenities then followed. To this day, the Trophy bears the scars of this purloining and we continue to wait for the carrier to tell us the real story  of that evening back in 2006. Perhaps all will be revealed in the fullness of time.

However all’s well that ends well and the Trophy “mysteriously” found its way back to the 2007 Invitational  in time for it to be awarded to the winning foursome of Rick Guilbeault, Guy Benoit, Lilianne Radford and Peter Lystiuk. On this occasion, with Security guards in attendance, the Trophy was closely held by the winning foursome. There were however, shouts from the back of the room concerning proper ownership of the Trophy.

In 2008, the Goodfellow Invitational was hosted for the first time by the Hylands Golf Club with approximately 100 attendees. While there was keen competition among the golfing foursomes, the Goodfellow trophy was awarded to two winning foursomes with the same score: the team of Rolland Leduc, David Jamieson, David Keay and Howie Radford and the second team of Andrew Fisher, Terry Kelly, Brian Mallon and Ward Mallon. As the Trophy was awarded, a person was again seen standing somewhat close to the Trophy and “eyeing” same.

In 2009 but without incident on this occasion, the 2 foursomes of Howie Radford, David Keay, Michael Tong and Patrick Hong and Chloe Goodfellow, Jordan Goodfellow, Scott Goodfellow and Jeffrey Meyer submitted the winning score to claim the coveted Goodfellow Trophy. Perhaps with the Goodfellow name now attached to a winning foursome, the odds of any future incident regarding the Trophy seem to be eliminated. Time will tell for 2010.

In 2010 and 2011 the team of Tom Charlton, Brian Mallon, Fred Johns and Ward Mallon walked away as winners. No incidents occurred with the trophy

In 2012, guess who? While they replaced team member Fred Johns, who had an injury, the team of Tom Charlton, Brian Mallon, Ward Mallon and Fred’s replacement, Brian Kelahear were once again the champions and it was thought they would never be beaten. The trophy remained intact.

In 2013 it finally happened the Charlton team was de-throned. The team of Jordan Goodfellow, Blair Latour, David Fenn and Brian Fenn were the winners. However the trophy went through some rough times. The golf bag fell off the base, some of the iron heads were broken off and the drivers shaft went missing. At some point we may have to replace the trophy but it still has some good years left in it.

In 2014 the Charlton team was back at it. The team of Tom Charlton, Fred Johns, Brian Mallon and Wes Thorne were the winners. Trophy made it through with no further damage.

Well 2015 again brought some new winners. This time the team of Carol Menard, Daniel Perrier, Marc Perron and Marc Rosignol were the winners, although there was a tie with the team of Frankie Papalia, Patrick Chamney, Kyle Stout and Rohan Thakar. The tie was broken by who got an eagle. Once again the trophy was unscathed however it’s near it’s end.

In 2016 “The Trophy” was totally restored to it’s original state, thanks to Phil Dempsey.
The winners of the 2016 RGI Trophy were; Frankie Papalia, Kyle Stout, Patrick Chamney and Rohan Thakar. Congratulations to all!

In 2017 there were no incidents with the trophy. The winners of the 2017 RGI Trophy were; Bill Robinson, Ron Armstrong, Mike Shaw and Jim Foley. Congratulations!

With a score of minus 7, the Strittmatter family team of Mike, Maureen and Stephanie bolstered by their son-in-law, Dustin Martin, were the 2018 big winners. What a perfect ending to a great day as Mike and Maureen had earlier in the evening proceedings been nominated as the first RGI Honorees in recognition of their incredible generosity towards the Olympic School projects.